As we say in German: Frohes neues Jahr (happy new year) to everybody and all the best for the futur!

Gerda
Posted by Gerda at 7:29 AM No comments:

"It wasn't my fault," John Corzine said in his testimony before Congress.  He went on to say that he didn't intend to break the rules.  I am pretty sure Bernie Madoff said the same thing. Chief Operating Officer Bradley Abelow and Chief Financial Officer Henri Steenkamp will also testify and have submitted written testimony attempting to distance themselves from the hands on operation of the company.  The main crux of thier testimony is that is wasn't thier job and they don't know how the money went missing. As the COO and the CFO, it is thier responsibility to make sure that there are compliance procerdures in place to deal sepcifically with co-mingling of funds and leverage and it is thier responsibility to make sure that these procedures are being followed. Steenkamp said he was not aware that there was a problem with clients segregated accounts until October 30th, when he discovered serious issues in fund calculations.  If he was the CFO, how could he miss this, unless someone in the organization was actively hiding it, or he was complicit in the actions.
Posted by Melinda at 6:41 AM No comments:

Not in the state of Oregon:

A Montana blogger just got sued for defamation by an Oregon lawyer--and she lost the case because she couldn't prove her assertion that the lawyer was a "thug and a thief" without revealing her source. The judge ruled that she was not protected under Oregon's shield law--thus couldn't keep her source private--and wasn't a "real" journalist because she had no professional affiliation.

Interesting case. Like it's mentioned in the article, this probably won't be such a big deal for bloggers--at least until a case like this goes to the Supreme Court--but it certainly hits a nerve anyway.
Posted by Lauren at 10:23 AM No comments:

The Inner Lives of Wartime Photographers 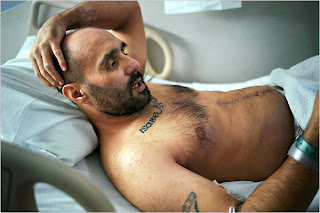 After last week's discussion in class, I found this NY Times piece really fascinating. It discusses the lives of war time photographers, and how they're right there, embedded, in the middle of a war and still have to perform their own job. Here is the link: http://www.nytimes.com/2011/05/08/magazine/mag-08lede-t.html?_r=2&hp=&pagewanted=print

Hello, all. I came across this brief set of rules for newspaper writers. Angelia has made many of these same points in class, such as avoiding redundant words. It's not so easy to write clearly, cleanly, concisely, but this ability sets the great writers apart from the mediocre ones.
Jim
Kilpatrick’s Rules of Newspaper Writing

Some time ago columnist and author James J. Kilpatrick met with a group of college students who asked him for a set of newspaper-writing rules. The list that resulted is reprinted with Kilpatrick’s permission.

1. Be clear. This is the first and greatest commandment. In a large sense, nothing else matters. For clarity embraceth all things: the clear thought to begin with, the right words for conveying that thought, the orderly arrangement of the words. It is a fine thing, now and then, to be colorful, to be vivid, to be bold. First be clear.

2. Love words, and treat them with respect. For words are the edged tools of your trade; you must keep them honed. Do not “infer” when you mean to “imply.” Do not write “fewer than” when you mean “less than.” Do not use “among” when you mean “between.” Observe that “continually” and “continuously” have different meanings. Do not write “alternately” when you mean “alternatively.” Tints are lights; shades are dark. Learn the rules of “that” and “which.” When you fall into the pit of “and which,” climb out of your swampy sentence and begin anew.

3. As a general proposition, use familiar words. Be precise; but first be understood. Search for the solid nouns that bear the weight of thought. Use active verbs that hit an object and do not glance off.

4. Edit your copy; then edit it again, then edit it once more. This is the hand-rubbing process. No rough sandpapering can replace it.

5. Strike the redundant word. Emergencies are inherently acute; crises are grave; consideration is serious. When you exhort your readers to get down to basic fundamentals, you are dog paddling about in a pool of ideas and do not know where to touch bottom. Beware the little qualifying words: rather, somewhat, pretty, very. As E.B. White said, these are the leeches that suck the meaning out of language. Pluck them from your copy.

6. Have no fear of repetition. It is better to repeat a word than to send an orphan antecedent in its place. Do not write horsehide, white pellet or the old apple when you mean baseball. Members of the City Council are not solons; they are members of the City Council. If you must write banana four times, then write banana four times; nothing is gained by three bananas and one elongated yellow fruit.

Posted by JKB_Boston at 8:24 AM No comments:

Can't we expect something more from the Republicans?

A few weeks ago, Angelia asked us to post on this blog, describing what outrages us when we read the political news.
More than anything, I feel frustrated at the overall low quality of the Republican candidates. Really, are these people the best, the most intelligent, capable candidates the party can put forward? There are certainly superior potential candidates, but most are simply not willing to subject themselves to the scrutiny, the grind, the pandering that is necessary to participate in the process, and to end up getting enough votes to be a serious contender.
Take Mitt Romney. An intelligent, affable businessman, who truly believes that he understands the problems of America & the world better than anyone else, and can guide the country into better days. He is as bland as they come, unimaginative, saying whatever he thinks he has to to get political favor.
I reference this excellent, extended article 'Building a Better Mitt Romney-Bot' in the November 30, '11, NYTimes Magazine. If you want to understand the packaging, the marketing of Romney for this current campaign, this article will open your eyes: so many managers & image makers, regulating how Romney is presented to the world.
A couple of representative quotes:
"Those who at close range watched Romney’s failure to close the deal in 2008 did not witness a rejection per se. Instead, it appeared that Republican voters could not quite envision this decent, clever and socially uneasy fellow governing their country — as opposed to, say, managing their stock portfolios. Stories of Romney’s wooden people skills are legion. “The Mormon’s never going to win the who-do-you-want-to-have-a-beer-with contest,” concedes one adviser, while another acknowledges, “He’s never had the experience of sitting in a bar, and like, talking.”
"It’s very unlikely that we’ll ever hear Mitt Romney and Barack Obama openly discuss the things they have in common. Nonetheless, we may well see in the general election a contest between two dispassionate and accommodating pragmatists and skilled debaters who relish intellectual give-and-take, and whose willingness to compromise has infuriated the party faithful. Both have promised change. Each will frame the other as being not up to the task."
If Romney gets the nomination, I will vote for Mr. Obama. Yes, Obama has spent most of his first term learning how to be president, with disappointing results. But he will, no doubt, be a better president during his second term, infinitely preferable to the cold ('dull, gray, predictable machine that is Romney.
That's one person's opinion.
Jim
Posted by JKB_Boston at 11:11 AM No comments:

This photo collection, called "Where Children Sleep," ran in the New York Times a few months ago. Many of you have probably already seen it (it made the list of the top 40 articles posted on Facebook in 2011), but if you haven't, it's worth a look. The slideshow is only 19 images; the child on the left, and their room on the right.

Most of them are disturbing, but they're disturbing in very different ways. From a 4-year-old pageant queen to a 14-year-old Kenyan tribe member -- and everyone in between -- it's a haunting collection of kids around the world.
Posted by Lauren at 6:47 PM 1 comment: